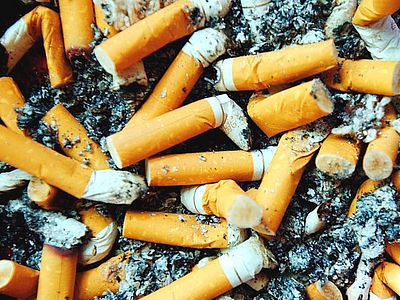 Recently, we have been virtually smoked out of our apartment by new neighbors across the hall. We have taken to putting a towel at the base of the hall door to keep the smoke out. I alerted management, and they said that if they don’t know exactly who the culprit is, they can’t do anything. They did post a notice in the elevator reminding people this is a nonsmoking building, but I don’t think that’s a very “official” notice since not everyone takes the elevator. I know the economy is bad and it’s difficult to find tenants, but how can I get the management to enforce the nonsmoking policy? And do I have a private right of action against the landlord or the smoking tenant?

[dropcaqp]I[/dropcaqp] had to have a couple of cigarettes thinking about answering this question. This is a tough one. I get uncomfortable answering questions that involve tenant versus tenant issues because the ultimate solution is usually an eviction. And I don’t like to see anybody get evicted.

With that in mind, let’s look at your problem. Assuming that all of your assertions are true, it seems clear that the tenant across the hall is in breach of his or her lease. If you informed management that the tenant across the hall is a smoker, I don’t understand how they cannot identify the culprit. If the lease is clear about prohibiting any smoking, then evidence of smoking in the unit is enough to warrant action. It doesn’t really matter who is doing the puffing.

If the landlord wanted to strictly enforce the no smoking policy he could simply serve the tenant a 3-Day Notice to Cure (stop smoking in the unit) or Quit (move out). If the tenant did not comply, the landlord can serve him or her with an unlawful detainer lawsuit. To prove the case, the landlord would have to rely on evidence that the tenant is breaching the lease. If you are serious about this, you should document your complaints in letters to the management company. If other tenants are offended by the smoking they should be writing letters too. Remember that the landlord cannot use letters at trial because they are hearsay evidence. He would have to rely on your and other tenants’ testimony.

I have found that landlords are reluctant to deal with tenant versus tenant issues. They don’t want to spend the money to litigate. Hell, most of them don’t want to spend money to fix the roof. In this case, the smoker isn’t breaking the law if he or she smokes inside the apartment. You can’t call the police to ratchet up the evidence and force the landlord to acknowledge your complaints.

You could try to file a petition for decrease in services at the Oakland Rent Board (assuming your building is covered). It is likely that you relied on the fact that the apartment was in a non-smoking building when you rented it. I think you can demonstrate that the neighbor’s smoking has interfered with you quiet enjoyment of the premises.

But I’m not sure that you can demonstrate a substantial decrease in services. There are no California habitability statutes that apply to your situation nor is it a code enforcement issue. I think this would also impact any private right of action for you, but that is not to say you don’t have a case against the landlord. If you can demonstrate personal injury or other damages, you may have a stronger case. I think an action against the tenant would be stronger if he or she was informed that the smoking was bothering you. From now on, all of your complaints should be in writing. You should also consult an attorney.

Recently, The New York Times reported on the movement to prohibit smoking in apartment buildings. The dangers of smoking are well-known, yet I’m not prepared to advocate for ordinances prohibiting smoking in residential units. Yes, I am a cigarette smoker, but I am also a tenant who lives in a rent controlled apartment. I don’t think it’s a good idea to give landlords another rationale to evict rent controlled tenants. I don’t want landlords literally sniffing around their buildings to find offending tenants, posing as righteous protectors of public health, when in fact the motivation is to kick the tenants out and raise the rent. Better to enforce existing regulations that require weather-tight units. You said that you have to put a towel under your door to keep the smoke out. Now that’s a violation.