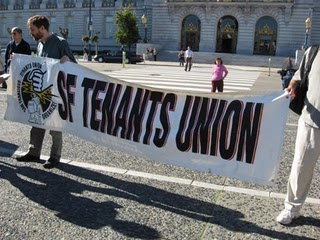 What Are My Rights If My Building’s Not Rent Controlled?

I saw last week’s letter regarding tenants in a 1907 building that was being sold. My roommates and I are in a similar situation (building is in the final stages of being sold), but our building is not under the Rent Ordinance. We live in a mid-size San Francisco apartment building (fewer than 10 units) built in the late 80s. Two of us in our unit have been here for over a year and are on the current lease (a former roommate was the previous leaseholder), which is up in two months. We are a bit worried because one of our neighbors heard the agent enthusiastically telling prospective buyers about how our building is not under rent control. Judging from craigslist, our current rent is in line with similar apartments in our neighborhood.

1) Can we be evicted after the purchase is finalized?

2) If we were to be evicted, would we get any relocation benefits? How much warning would they need to give us?

3) Is there any limit to how much they can raise our rent before or after our current lease expires?

Basically, we’d like to know what, if any, rights those of us who don’t live in Rent Ordinance buildings have and should be aware of.

You do have rights under California state law, but as I have previously noted, those rights are mostly based on thousand-year-old landlord/tenant doctrine from the merry ole days of King John and Robin Hood.

Your tenancy is safe for the next two months, however, because you have a fixed-term lease. If a new landlord attempts to evict you without cause during the term of the lease, he will be in breach of the lease. It’s unlikely that a new owner will try to evict you before your lease is up. Most of them understand that they cannot interfere with  an existing lease. The sale of the building may take a couple of months to close anyway.

A landlord would also breach the lease by attempting to increase the rent before the term expires, so you don’t have to worry about that for now.

After the building sells, California Code of Civil Procedure §827 provides that you are entitled to a sixty-day notice to increase the rent more than 10%.

California Civil Code §1946.1 states that you are entitled to a sixty-day notice to vacate because you have lived in the unit more than a year. You can be evicted without any cause, but a landlord has to serve a sixty-day notice.

Limitation on rent increases? Are you kidding?

Much of your anxiety regarding your tenancy derives from a politically expedient decision made back in 1979 to ensure that rent control would be enacted in San Francisco.  Now, more than thirty years later, it make no sense to exempt any rental units from the just cause provisions of the Rent Ordinance. Unfortunately, state law already exempts newer units from limitations on rent increases.

So what do landlords have to fear from extending local just cause provisions? Absolutely nothing. They’ll tell you that extending just cause will chill new development. There is not a shred of evidence to support that contention. Why would there be, if landlords are exempt from price controls?

The vast majority of evictions are filed for failure to pay rent–a just cause under the ordinance. The real reason landlords don’t want to extend the protections is that they don’t want to give up any control. It’s an age-old battle. It’s the disincentive of democracy chipping away power from those who would be dictators.

As you may know, we have an election coming up in November. San Francisco is still comprised of 65% renters. If  candidates for mayor or any other office say they don’t want to extend the just cause eviction provisions of the Rent Ordinance to buildings built after 1979, tell them to fuck off.