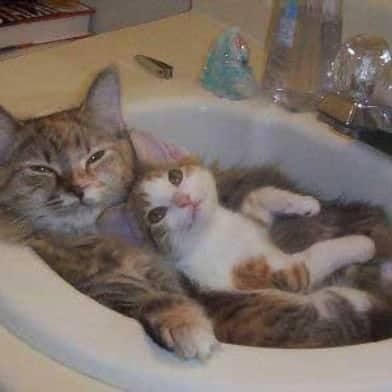 Can I Replace My Sink Without My Landlord’s Permission?

My roommates and I are in our 20s and rent in an 8 unit building constructed sometime soon after the 1906 quake. We know that old buildings have quarks and can be expensive to maintain, so we don’t expect our apartment to have luxury finishes and fixtures. It’s a rental after all, lots of renters abuse their spaces and the owner isn’t going to invest too much in finishes and fixtures. Everything in the building is technically up to code (we’ve looked into it) but it’s, well, ugly.

Our particle board kitchen and bath cabinets are slowly dissolving because the faux wood veneer is peeling. The linoleum and plastic counters in the bath and kitchen are sprinkled with cigarette burns from previous tenants. We have carpet that we can’t shampoo because it actually gets dirtier. We think the floor was not swept after the last carpet was removed and this one installed. Spots where plaster cracked or crumbled were just painted over repeatedly. These are the most annoying issues, there are many others. Everything is perfectly legal and serviceable, only hideous, which unfortunately is not illegal. We’re very clean but there only so much lipstick one can put on a pig. All of these things existed when we moved in but we took the place because it’s what we can afford.

My question is: What would happen if we were to change something without the landlord’s permission? Here is the story: Our friend is a contractor with fancypants clients. He recently remodeled a bath where he removed a perfectly good (and obscenely expensive) sink and cabinet that would be great in our bath. Normally he would sell it to a salvager who probably would sell it to a landlord. But he offered it to us! With installation! He could do it in a few hours and all we have to do is make a yummy dinner! How much trouble would we be in when we move out? Could we get penalized for actually improving the apartment?

As an attorney, I usually counsel tenants after everything has blown up and the landlord tenant relationship is ruined and wrong. With that in mind, you should know that I generally advise tenants against making any improvements to a landlord’s property, permission notwithstanding. I understand the desire to improve ones  living conditions, but that’s the landlord’s job.

At the very least, any permission to alter, repair or improve should be in writing as well as any other contractual provision providing for compensation or rent reduction.

I recently spoke to a tenant who, with the landlord’s permission, remodeled the entire house. The landlord verbally promised to compensate him for his efforts.  The tenant trusted the landlord and did not insist upon a written agreement. After the renovation was complete the landlord evicted the tenant using the Ellis Act.

If you don’t get permission when it is required by the lease, the landlord can evict you for breach of the lease. Just because you improved the property does not immunize you from eviction.

You have not considered another important issue–many alterations one might want to make on one’s apartment will require a building permit.

San Francisco Building Code section 106A.2 provides a list of alterations and repairs that do not require a building permit. The Department of Building Inspection also provides a pamphlet entitled, “Getting a City Permit,” that generally outlines when you need to get a permit and how to get one. Unfortunately, I don’t think you proposed improvement is on the list. San Francisco is notorious for requiring building permits for everything and I have a feeling that installing a new sink will be one of them. You may want to call DBI to confirm my suspicion.

Getting a permit to install the sink isn’t going to be a big deal, but is your friend willing to deal with that process and are you willing to pay for it? How yummy can that dinner be? Before you request the landlord’s permission, you should have an answer to that question.

If the landlord doesn’t care about  getting a permit, he must include that statement in his permission. Why? Because the landlord can later claim that you installed the sink illegally and that it will cost him thousands of dollars to pay fines and/or replace the sink. Yes, I’ve seen this issue too, but it usually comes up in quasi-legal, live-work arrangements.

From the landlord’s perspective, he has the right to know about and to approve of tenant improvements to a unit to minimize his risk down the road.

My short answer to your question is, yes, you must get the landlord’s written permission.

Without his permission, yes, the landlord can create a lot of grief, either by attempting to evict you or dunning you for your security deposit after you move out–all despite the fact that you made a simple, small improvement to the unit.

Some of the dilapidation in your apartment may rise to the level of a substantial decrease in housing services. Take a bunch of photos of the unit and bring them to the San Francisco Tenants Union to evaluate a potential Rent Board petition.

Tenants: At first blush, this idea seemed to be a no-brainer, an easy win-win for both parties, but you have to remember that you don’t own your unit. Rarely is it worthwhile to improve a property you don’t own. It never makes sense to improve a rental unit without the landlord’s written permission.