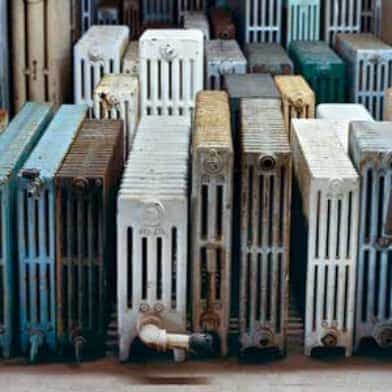 How Can I Get My Landlord To Consistently Heat My Apartment?

Like many renters in old buildings, I rely on steam heat as my only source of warmth. In my building – and I know it is this way in others – the heat is centrally controlled and goes on and off building-wide. This means I have no way to turn the heat on when it’s cold, or turn it off when it’s too hot. The wiring can’t handle space heaters, so I resort to opening my gas oven and turning it to 400 degrees on the colder days, which may be unorthodox (or even illegal?) but is surprisingly effective. During hotter days the heat will sometimes go on even though the room temperature is certainly well above 70 degrees, and I have no option but to sweat it out.

When I moved in I was told the heat needed to be on a certain number of hours each day. This contradicts what I read on the SF Rent Board website, which explains that the metric of adequate heat is by temperature and not just hours of heating. I’ve never been able to pinpoint the heating schedule in my building as it appears to vary, but it is off most mornings from 6-8am and for large chunks of most evenings – the times when I need it most.

Is there any action I can take to improve this situation? Even if I am unable to control my own heater, it would be helpful if I could at least convince the landlord to publish a heating schedule and maybe even get that schedule adjusted so that the heater is used in a more rational manner. While I would love more heat during those cold hours, I also fear an over-response resulting in more heat during warmer days. Is there any recourse against over-heating an apartment?

I believe the building was built in 1912 and is eight stories of mostly studios in downtown San Francisco.

Your question is certainly appropriate this week. As I write this response, I’m bundled up in my minus 40 squall jacket. And let me tell you, it ain’t easy typing with gloves on.

You should not have to heat your apartment with your oven. That’s the bottom line here. It’s dangerous, expensive and while it is not per se illegal, if you start a fire, you’re going to get blamed for it.

“[H]eat capable of maintaining a room temperature of 68 degrees Fahrenheit (20 degrees Centigrade) at a point midway between the heating unit and the furthest wall and which point is three feet above the floor, shall be made available to each occupied habitable room for 13 hours between the hours of 5:00 a.m. and 11:00 a.m. and 3:00 p.m. and 10:00 p.m.”

Clearly you can demonstrate that the boiler isn’t timed correctly if you are not receiving heat between 6 a.m. and 8 a.m. or in the evenings before 10 p.m. I recommend that you talk to other tenants in your building to see if they are experiencing the same problems. In this case there may be persuasion in numbers. You should write the landlord, en masse, pointing out that the boiler seems to be working, but that the timer does not conform to the law. Give the landlord some time to fix the problem. If the landlord does not respond or refuses to fix the timer, you should call a San Francisco Housing Inspector and make a complaint.

Regarding the heat in the summer, there may be people in the building, for example, elderly retired tenants, who need the heat. Of course almost everybody requires some heat in the summer in San Francisco, even Mark Twain. But seriously, as long as the heat is working the way it is supposed to, you should be able to open windows to cool down in the hotter months.

Recently, in a tenant lawyer list serve, a colleague mused that the San Francisco requirements are antiquated and don’t consider people who work at home, who are sick or who are retired and at home during the day, not to mention folks who work the nightshift. It’s a point well taken which deserves consideration politically. Although this might not be an issue if there were requirements to refurbish old buildings to make them more livable. Where the hell is the stimulus money to insulate residential buildings and provide efficient heating systems? Oh yeah, I forgot, it’s in Afghanistan and Lloyd (Goldman Sachs CEO doing God’s work) Blankfein’s pocket.