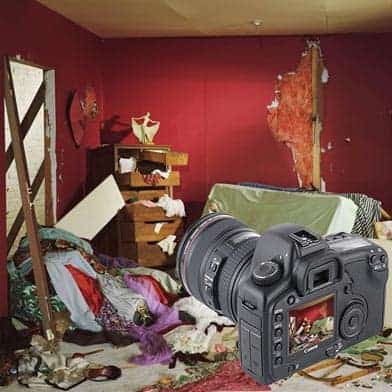 This Is Why You Take Photographs At Move In

My husband and I have been renting a house for 7 years and are getting ready to move.

When we first moved in we had a 1 year lease which of course is now expired, and our here month to month. When we moved in the house had quite a few issues; cracks in the tile on the floor, rooms not painted, the list goes on.

At the time, the landlord refused to do a walk thru with us telling us that she already knew all the problems with the house. I didn’t push it because I didn’t realize that there might be a problem when it came time for us to move out.

The house was built in 1972 and has the original carpet in it, it’s in terrible need of replacement but she won’t replace it. Our dishwasher has been broken for about a year now and her answer to us is that “she will replace it when they are on sale”. I told her that we rented the house with a working dishwasher so replace it or let us deduct rent, no answer on that one.  Well I’m pretty sure dishwashers have been on sale somewhere.

Since she refused to do a walk thru, can we be held liable for the damages that were existing when we moved in? We took pictures of everything right after we moved in and they are date imprinted. We have also painted all the rooms and have done some other repairs for which she wouldn’t  refund us.

As I read through you question the first time, I thought, “Oh boy, this is going to be messy if the tenants try to sue the landlord in small claims court.” That is, until I read the second to the last line. You did the right thing in documenting the move-in condition of the house with photographs.

Ideally, it’s a good idea to try to get a landlord to fill out a move-in checklist. I provide a typical example in my early blog, Grand Theft Security Deposit. A typical checklist can be found here. Even if you can persuade the landlord to fill one out, you should be taking photographs off the unit while the landlord initially inspects. Right then and there, if the landlord has any rudimentary intelligence, he’ll know that it’s going to be tough to screw you when you move out.

Civil Code §1950.5(f)(3) also states: “The tenant shall have the opportunity during the period following the initial inspection until termination of the tenancy to remedy identified deficiencies.”

Although there is no case law on this to my knowledge, I think a tenant can make a strong argument that the landlord’s refusal to do a move-out walk-through estops (prohibits) her from making later damage claims.

The key here (and I know I harp on this almost every week) is to get everything in writing. For example, having an email from the landlord refusing to do a properly requested move-out inspection would, with your photographs, make the case an easy winner.

It is also important to read Civil Code §1950.5 and follow the procedure exactly. That way the landlord cannot later claim that you did not request a final walk-through or that you did not timely request one.

As usual I recommend that tenants, before they give notice to vacate, visit the San Francisco Tenants Union to understand their rights and obligations during the move-out process.

As for your 1972 orange shag carpet, it’s only 40 years old. It’s a classic. You should simply love and accept it these days, sort of like a 1972 Richard Nixon.

I almost forgot to mention that you always have to sue a landlord like this to get back your deposit. But in your case, you should prevail. It was a smart move to document the move-in conditions with photographs.