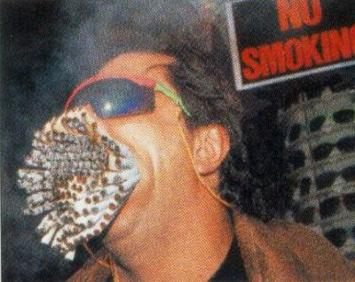 Is My Landlord Trying To Evict Me For Smoking?

I’ve been a tenant in a 36-unit apartment building in SF since October 1992. The landlords hired a new property management company about a year ago. Today, I received a letter from the management company stating that they had received an “official complaint” that smoke originating in my unit has continually permeated into surrounding units. The “complaint” demanded that I be more vigilant in containing the smoke. It goes on to point out the “quiet enjoyment” and “house rules” provisions of my original lease, none of which reference smoking explicitly, although “house rules” refers to “odors.”

OK, I’m a smoker, and have been since I moved in. I smoke three to four cigarettes per day, one of which I don’t smoke in my apartment. I try to be considerate by opening windows and using odor eliminating sprays, etc., and the common hallway window is always open. No one has ever complained to me about smoke and there are other smokers in the building.

In the past couple of weeks, I’ve noticed that the vacant apartment in my wing is being shown to prospective tenants so I wonder if this “official complaint” is coming from my neighbors or the prospective tenants/rental agent. Bottom line–I need advice about how to proceed.

What is the first thing I fix on here? You got it–a long-term, rent-controlled tenancy. The second element is a relatively new management company who wants to show their prowess to the owner by maximizing profit. What do you want to bet that they just hired some new hotshot graduate of the Citiapartments School of Apartment Management? This is a classic case of a landlord’s initial attempt to establish a pretext to evict you.

It would be interesting to understand what exactly made the complaint “official.” Was it in writing? Typed on a real, honest-to-goodness letterhead with straight margins and not too many misspellings? My guess is that the rental agent may have been the “official” complainant. I’ve seen this before. I had a case in which the opposing attorney claimed that a rental agent had a right to quiet enjoyment while exhibiting the units in a particular building. The agent didn’t live in the building.

Quiet enjoyment is a term of art in the law, meaning that the term has a very specific legal definition: “The possession of land with the assurance that the possession will not be disturbed by a superior title.” (Black’s Law Dictionary [8th ed. 2004]). One has to have possession (a lease) of land (an apartment) to claim the right to quiet enjoyment. Believe me; you don’t get to sue the inconsiderate clod sitting behind you, talking through the whole movie, for interfering with your quiet enjoyment. Nor is the rental agent entitled to quiet enjoyment by just being in the building.

Given what you have told me, I think you would be wise to continue your practice of eliminating the smoke as best you can. Respond to the management company in writing. Point out that smoking in your apartment is neither a breach of the lease nor is it a nuisance. Tell them about the precautions you take and request that they install weatherstripping under your door.

I am also concerned that other tenants may be complaining without alerting you. As I said last week, tenants have to stick together. I think you should politely ask your neighbors if your smoking bothers them and try to understand how their concerns could be accommodated. For example, a neighbor sharing the hall may need weatherstripping to create another barrier to smoking entering her unit.

Expanding on my thoughts last week, before you blame yourself or another tenant for problems arising from living in close quarters, consider the landlord’s duties. As in this case, the landlord may be able to fix the problem causing the discord. If management refuses to act, it’s clear to me that the landlord just became the problem.