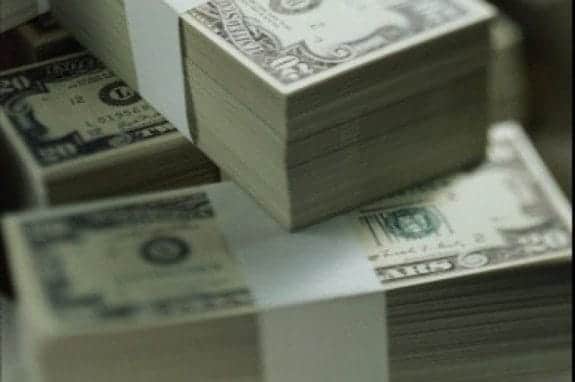 Why Is My Landlord Demanding A $150 Late Fee?

I am a 25 year old woman who has been living in a rent-controlled apartment in a six unit building for about 1.5 years.  My apartment is three bedroom, two bath and I share it with two other roommates.

I mailed my rent check in the mailbox on the day it was due, but since it was on a weekend it didn’t get postmarked until that Tuesday (the 4th) and received on the 6th.  My landlord is now trying to invoke the late fee clause of our lease, which is $150 fee, to be included in next months rent.

He claims that I can just mail my check two days before the 1st to have it arrive on time. But this is just not possible for us since my roommates and I receive our paychecks at the end of the month.  My roommates write checks to me (well, we use Venmo) and I send in one master check. They need their paycheck to pay me, and I can’t cover their rent alone without potentially bouncing a check.  Therefore, we really can’t put our check in the mail before the last of the month.  I have requested in the past to allow us to pay our rent electronically but he has ignored this request.

My first question is, are late fees legal if they are included in the lease and, if they are, is $150 considered a legal amount or egregious for this time frame and a $3820/rent?  Bonus question: is there any way I can force him to accept electronic payments?  I would like to not stress about this happening again and save money on stamps and envelopes.

In the past several months I’ve received many more calls from tenants about late fees and rent payment methods, leading me to believe that some landlord “working group” decided to focus on this method of tenant harassment. S.P.O.O.K.S.?

As usual, they got it wrong. If the landlord only provides one option to deliver the rent, and that is mailing it, your payment is “conclusively presumed” to be accepted on the date of mailing.

(I am not a fan of bank-generated checks that are supposed to arrive on a given date. I have consulted with quite a few tenants whose landlords genuinely claimed that they weren’t receiving the rent on time despite that fact that the tenant had scheduled automatic payment a few days before the first.)

Civil Code §1671 deals with with the validity of liquidates damages provision in a contract. Section 1671(c)(2) provides:

In the cases described in subdivision (c), a provision in a contract liquidating damages for the breach of the contract is void except that the parties to such a contract may agree therein upon an amount which shall be presumed to be the amount of damage sustained by a breach thereof, when, from the nature of the case, it would be impracticable or extremely difficult to fix the actual damage.

Check your lease, if there is no provision in which you agree that “the amount which shall be presumed to be the amount of damage sustained by a breach thereof” or similar language, then the late fee is void.

Many leases, however, have such language. Then you move to the second part of Mr. Carlson’s argument–that late payment damages are not impracticable or extremely difficult to fix.

The detriment caused by the breach of an obligation to pay money only, is deemed to be the amount due by the terms of the obligation, with interest thereon.

That interest is the “legal rate” of 10% per year, without compounding, or 1/3650 th of the monthly rent per day. On a $1000 monthly rent, that’s 27 cents per day, or $1.92 per week.  The word “deemed” in this statute is significant. It means that even if the landlord claimed personal injury by furrowing his brow and gnashing his teeth over your late payment, pain and suffering over his deep grief that he would have to cover the mortgage out of his savings, paper and processing costs from having to write you a 3-day notice to pay or quit, the LAW says he’s only suffered and is only due the unpaid amount and the few paltry cents of interest.

You may want to send your landlord this article with a check for $4.15 and tell him that you’re genuinely concerned that teeth-gnashing and brow-furrowing may be bad for his health.