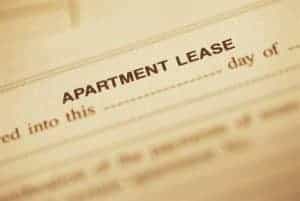 Does A Mistake In My Lease Give Me Free Rent?

Mistake in the lease.

My roommate took our lease to a lawyer colleague who says this is an error that the landlord should have insurance to cover (errors and omissions), and that we are not responsible for rent beyond a total payment of $23,400. I’m worried our petty (and nosy, which is why we’d like to leave) property manager will try to retaliate with outlandish security deposit withholdings. Should I be concerned that she will turn around and screw us or overjoyed that we (maybe?) have a free month of rent?

Some background about our property manager:

We do keep the apartment rather clean but the manager will have to do some mold abatement since the exterior walls and windows are poorly insulated (we have cleaned and treated it ourselves with bleach after realizing why there was such fresh paint when we moved in, but I should hope she would make preventative repairs in the future.
We haven’t told her about it because of personality issues, and as sort of a trump card should she try to evict us for some petty and unjust reason). Why would I be afraid of dealing with unjust eviction? She is a total power tripper. This woman called us more than 10 times in the first month of our tenancy accusing our guests of graffiti-ing the elevator (we don’t have friends who would do that), and angrily accusing us of leaving our bikes in the lobby– which weren’t ours.

She looked through the trash to identify the person tying their bags too loosely (us, we think?) and surprised us with an in-person reminder of the “house rules” through our kitchen window which we had guests over for weekend brunch.

She yelled twice at a guest who was smoking well beyond the required 20-ft from the nearest door or window, insisting the “rule is 20 feet from the property line,” and got into a heated argument with my visiting (older) father about sanding a bookcase on our balcony (the use of power tools is not addressed in the lease; her beef was the wind blowing some dust onto her balcony) without introducing herself as the property manager.

She also threatened to evict me after assuming my boyfriend lived there because I once loaned him my keys to bring me medicine when I was bedriddenly ill (maybe from the mold!). The list goes on, but those are the highlights. My roommate essentially told her to back off and she has since been less invasive in the last 6 months. It doesn’t surprise me that our unit– the one above hers– stayed vacant for several years before we moved in.

Don’t be overjoyed, even cautiously. This is just a mistake in the drafting of the contract. You’re not going to get a free month’s rent. You should, however, be able to point out the mistake to get out a month early. And you should get out as fast as you can.

Assuming you want to leave, give your 30-day notice as soon as possible. Point out the mistake in the lease. Also, show the landlord that it is clearly a mistake because the total amount of rent to be paid is equivalent to one year’s worth.

If you don’t pay the last month’s rent, the landlord could serve you a three-day notice to pay or quit. If you do not pay, you could be served an unlawful detainer (eviction) lawsuit. That would be a foolish move on the landlord’s part, given that you would likely have vacated before a trial on the issue. But why take that chance? The cost and hassle to defend an unlawful detainer is rarely worth it, especially if you are going to move anyway.

Call a DBI Housing Inspector to complain about the habitability issues you describe. If the inspector violates the the unit, you’ll have better evidence to present when the landlord refuses to return your security deposit. Notice I didn’t say if.
You should discuss all of your issues with a counselor at the San Francisco Tenants Union.

Let me address the real issue here. There is no reason, ever, to withhold a complaint about mold or any other condition that makes a unit uninhabitable. Why? Because the landlord should be given an opportunity to repair the problem. If a landlord refuses to repair, you call DBI. It’s that simple.

The landlord also deserves to know about the psycho manager. Maybe, just maybe, he will understand that she is costing him money and he might want to do something about that.

Tenants: Never adopt a passive/aggressive approach when dealing with your landlords! You’re never going to change anything that way. It’s always going to get worse for you, individually, as well as collectively.

Landlords can only own you if you let them.