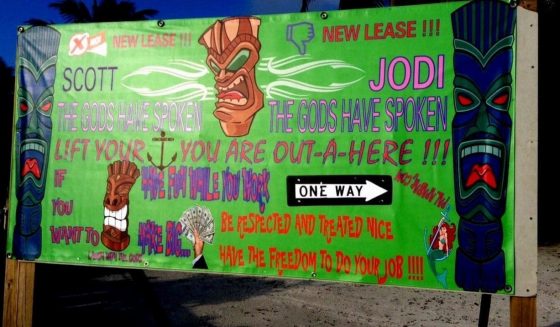 My Erratic Landlord Is Asking For An Illegal Rent Increase

I have a question about rent increases. My girlfriend and I live in a rent controlled 12-unit building in Nob Hill (built in 1907). We recently received a 30-day notice to increase our rent from our landlord. He is trying to increase our rent by 3.8% (1.9% for 2012 and 1.9% for 2013). While I know it’s perfectly ok for them to bank increases, we haven’t lived in the unit for two years yet. We moved in on August 1st of 2011. He stated in his notice that the rent increase was to take place on 7/1/2013, which would only be 23 months of tenancy. This compounded by the fact that he said he wouldn’t raise our rent when we moved in as it just “pisses people off” leaves a bit of a bad taste in my mouth… I have tried to reason with him before on certain things and he has responded in a completely erratic way due to the fact I think he’s strung out on drugs most of the time to the point my girlfriend is afraid of him. He lives in our building so I don’t want to make it an unbearable living situation but given how crazy rents are getting these days we don’t really have too many options.

Thanks for any help in advance and thank you for your column it’s a great deal of help and a invaluable service to the rest of us non hedge fund/dot commie gazillionaires.

Your rent increase is technically illegal. “Banking” rent increases is a well-established and legal practice, San Francisco Rent Ordinance §37.3(a) provides in part, “A landlord who refrains from imposing an annual rent increase or any portion thereof may accumulate said increase and impose that amount on the tenant’s subsequent rent increase anniversary dates…” As you stated, a rent increase of 1.9% could have been imposed in August 1, 2012, but the second increase cannot be imposed until August 1, 2013. I’m sure you understand that his prior “promise” to refrain from increasing the rent could never be a defense to refusing to pay the increase.

Politely inform the landlord, in writing, that you will begin to pay the increase on August 1, 2013. (You should establish a practice of written communication with your landlord despite his proximity in the building.)

Then wait for all hell to break loose.

You think your landlord is strung out on drugs. He may be, but sometimes the behavior one ascribes to drugs can simply be a syphilitic dementia-like, Caligula-style obsession for control commonly found in landlords.

I hope your landlord doesn’t have a problem waiting for his increase for one month, but your description reminds me that some landlords can turn into trolls at the first hint of “defiance” from their tenants.

If your landlord starts to get nasty, make sure you document the behavior and, if necessary, call the cops.

I truly understand your conundrum. Two years ago, rents in San Francisco were, what, a tenth of what they are now? 😉 But do you really want to live in fear? How much is that worth? I think you should consider moving. You should also consider volunteering to strengthen rent control, devoting the same amount of time you might spend worrying about your dickhead landlord. Call the San Francisco Tenants Uniion or Tenants Together.