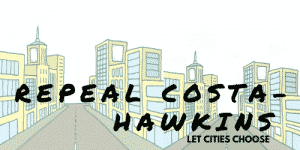 For those of you who can, I urge you to go to Sacramento on January 11, 2018 to attend the first Assembly Housing and Community Development Committee hearing and to loudly support Costa Hawkins repeal—to vociferously support the right of local government to enact rent control.

Remember, Costa Hawkins was a bipartisan measure authored by Jim Costa (D-Fresno), a congressman now and a member of the Blue Dog Democrats; and Phil Hawkins (R-Bellflower), a one-term 56th Assembly District representative.

Another pervasive effect of Costa Hawkins in already rent-controlled jurisdictions, is that it allows landlords to increase rent as they see fit upon subsequent occupants, roommates who still reside in a unit after the original tenant on the lease has vacated. The typical scenario here is that a new owner, usually a rapacious capitalist, MBA bean counter, will see that the current tenants are not those listed on the lease and serve a sixty-day notice to increase the rent. This often occurs with long-term tenancies in which the former owners allowed the original and subsequent tenants to replace roommates informally.

More recently, California Democrats had an opportunity to to support tenants and failed to do so. In 2013, then State Senator Mark Leno introduced a bill (SB 603) to amend the security deposit law to include, among other things two issues I’ve noted here. It would have required landlords to keep security deposit in separate accounts and to pay interest on the amounts. It would have also required that a court must award statutory damages with a finding of a bad faith claim or retention of a security deposit. The current law says “may” and statutory damages are only assessed in about 3.5% of cases. The bill was defeated by Democrats!

In an article for BeyondChron complaining about the defeat of (from my perspective) a relatively innocuous bill, Dean Preston wrote:

“[T]here appears to be an additional factor driving some of these votes. 17 of 39 senators, that’s 44% of the Senate, are themselves landlords. This results in a bias when it comes to landlord-tenant affairs, one that is easily exploited by landlord lobbyists.

The senators who betrayed tenants last week are relying on not being called out. They know things often fade quickly from public view, particularly votes cast in Sacramento. Tenants at the grassroots level need to get their pens, computers, phones, bullhorns, signs, bodies and sense of outrage ready. Senators who opposed this bill need to get an earful as they return to their districts.

There is no getting around this basic fact: a majority of Democratic senators voted to protect landlords who illegally withhold tenant security deposits. At this point, California Democrats cannot even be trusted to give tenants basic protections enjoyed by tenants in Alabama. Tenants may have helped elect the 2/3 Democratic majority, but so far they sure aren’t getting much in return.”

What has changed? It looks like only five of the democratic senators who voted against the security deposit bill are still holding office, but will the turnover be enough? I’m not holding my breath, especially since one of the ass-wipes who voted against the bill, Kevin De Leon, recently announced that that he will run for the U.S. Senate against Diane Feinstein—as a progressive. I’m no fan of Feinstein, but I will never vote for Mr. De Leon because he demonstrated his true nature with that one vote.

Why not call the Democrats out now?

Dean Preston’s words still ring true: “California Democrats cannot even be trusted to give tenants basic protections enjoyed by tenants in Alabama.” While I admire and support the effort to repeal Costa Hawkins on the legislative level, a warning to legislators should be included in any dialogue—You fuck us on this and we’ll fuck you back.

Thanks to Tenants Together and all the others, the tide is rising for tenants, but we cannot rely upon anyone but ourselves. I recommend that tenants, especially tenant organizers read Last Call: The Rise and Fall of Prohibition, by Daniel Okrent.

“There have been many studies that follow the rapid growth of the temperance movement in this era — the colorful saloon-busting of Carry Nation, the tent-revival magnetism of Billy Sunday — but none can match the precision of Okrent’s account. Momentum, he notes, depended on both a keen understanding of the political process and a ruthless approach to elected officials, who either joined the cause or found themselves under endless assault.” —New York Times Sunday Book Review, by David Oshinsky, May 21, 2010.

The strategies chronicled in “Last Call” were emulated by Tea Party Republicans, showing that pressure can be applied at the local level to successfully effect single issue change. The single issues in each case, prohibition and no taxes, were extremely narrow-minded. Imagine how successful tenants could be with the single issue of local control, or eventually, the right to housing. I believe an “endless assault” on Democratic legislators should not only come in the form of consistently calling them out, but also forming a Tenant Party to run tenant activists in local and statewide races. Certainly any Tenant Party candidate should run to win. In San Francisco and other cities with large tenant populations winning is possible. But even in losing a given election, a Tenant Party candidate would not bode well for a Democrat. If there’s a Republican out there who will vote to repeal Costa Hawkins, tenants should vote for that candidate as well.

Did I mention that it’s also time to repeal the Ellis Act?