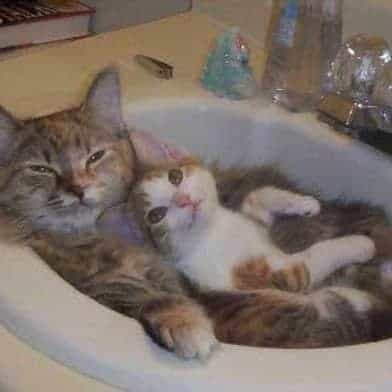 I live in a very old building (circa 1924) and like many old buildings it has problems. Right now I’m having one where for some reason, my sink is bubbling up water and sludge like a geyser every few hours.

I had a similar problem at a similar vintage building. I called the management company, they had someone on the way within hours, and made sure the problem was fixed (it has to do with the vent system for the pipes.) No problem.

Here, however, the manager on site is taking longer to get this fixed. In the meantime I can’t use my sink to do dishes and the smell is awful. It’s not entirely the manager’s fault – the landlord (who lives far away) does not like to hire good contractors and has to approve big projects (in this case requiring the roofers to unblock the vent they accidentally blocked) thus dragging out what the manager has said is a fairly easy problem to solve.

Question is this: if this keeps up I’ll haven not had the use of my sink or my kitchen for at least a week. Do I have any recourse, financially or otherwise? It seems a bit much when I’m paying over $1000/month for a studio to have to put up with this too.

(and yes, I’ve taken photos, etc. and documented all of this).

Back in Florida, or wherever, your landlord thinks he has done enough. He reroofed the building for christsakes, what else do you want? He’s pissed that he had to spend the money, but he also thinks, “Hey, I’m a hero.” After all, how many landlords ever reroof their buildings? For more on this feel free to read my blog post, “A Cave By Any Other Name.”

This issue is more common than you might think. It happens with new tar and gravel roofs. The vents for the sewer pipes usually rise a couple feet over the roof. Yet somehow, either during the removal of the old roof or the application of the new, tar and gravel gets into the vents and falls to the bottom of the pipe assembly. The drains become clogged in the manner you describe. I don’t understand why this happens. Perhaps one of our roofer readers can help me out.

The stinky sink could become a health issue as well as a breach of the warranty of habitability. You have to get into “making a case” mode. It’s good that you have documentation. You should also begin to communicate your frustration to the manager or owner or both in writing. As I’ve said before, emails will do the trick. Tell the manager that you will be calling a Housing Inspector at the Department of Building Inspection if the problem isn’t solved in a couple of days.

You might consider hiring a plumber to repair the clog and deducting the cost from your rent, but that can get dicey. Civil Code Â§1942 governs the process, but you must make sure you have ample documentation to prove the landlord unreasonably delayed or refused to repair the problem. The code also provides that you cannot deduct more than one month’s rent. This remedy could come back to bite you because the landlord could try to evict you for nonpayment of rent. You don’t want to be a defendant in an unlawful detainer lawsuit, because, even if you’re right, it will cost an arm and a leg to defend the suit. And I rarely think it’s good idea to try to represent yourself in an eviction.

The better, although slower, approach is to call a Housing Inspector. She will definitely write a Notice of Violation for the problem you describe. Usually that gets the landlord to act because he could be fined by the City if he waits. An NOV also starts the clock for you to consider not paying your rent. Civil Code §1942.4 essentially provides that you can refuse to pay your rent 35 days after the NOV, if the landlord hasn’t done anything to fix the problem.

Join the San Francisco Tenants Union. They can help you evaluate your case and decide upon the best strategy to get the drain unclogged and to recover your damages. Good luck.