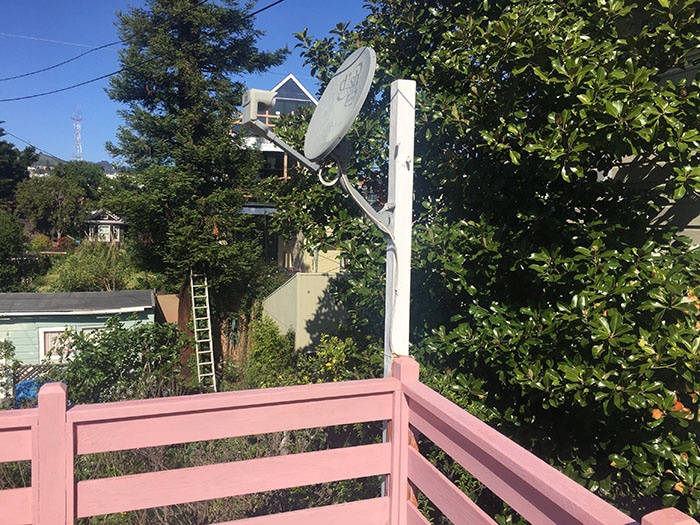 Can My Landlord Make Me Remove My Satellite Dish?

Can a landlord, out of the blue, demand the removal of a direct tv satellite dish?

Facts about the rental:
1. Single Family Unit. Tenants have rented downstairs since 1996.
2. Landlord filed an OMI in 2015 on the upstairs tenant but lives in Canada.
3. Direct TV was installed in the back deck in January 2010. Landlord made “improvements” to the back deck prior to renting upstairs to the daughter of downstairs tenant in 2015.
4. Nothing in the lease prohibiting installation of dish.
5. Landlord verbally abusive over the phone to tenants and direct tv representatives when making repairs.
6. Second wife moved in upstairs before Christmas of 2017.
7. Landlord did not return security deposit of upstairs tenant claiming repairs needed after moving in for a short period of time. Gone back to Canada before Christmas of 2015.
8. All utilities are under landlord’s name except for direct tv. Landlord doesn’t have cable or landline.

I’m going to try to unpack this as best as I can, but this question is illustrative of many inquiries we receive by email—not enough information about your tenancy and, interesting, but irrelevant to your question, information about the former tenants.

If you’re asking me if your landlord’s a shitbag, I’d say yes, given the facts as you have presented them. He thinks he’s the end-all, be-all lord of the manner. It also looks like he wrongfully evicted the tenants upstairs and, adding insult to injury, refused to refund their security deposit. You should contact the former tenants soon to let them know that the landlord never moved in because there may be a statute of limitations problem to sue for wrongful eviction, depending upon the notice and what they knew when they moved out.

You call the the unit a “single family unit” but because you mention an upstairs and a downstairs, I’ll assume that it’s a two-unit building. I’m also going to assume that you live in San Francisco and that the building was built before 1979, and therefore rent-controlled.

Finally, the fact that the landlord pays all of the utilities may indicate that your unit is illegal, which could be relevant to your situation if the landlord is trying to force you out to avoid complying with planning code regulations that may require him to legalize your unit. I owe my readers an in-depth article about the new requirements, so I won’t open that can of worms here.

Can your landlord make you remove the satellite dish?

You state that the lease does not prohibit the installation of the disk, but that may not end the inquiry. Many form leases contain a prohibition against alterations without the landlord’s written consent. Here’s a more or less standard clause:

MAINTENANCE and ALTERATIONS: RESIDENT shall not paint, wallpaper, alter or redecorate, change or install locks, install external antennas, satellite dishes or other equipment, screws, fastening devices, excessively large nails, or adhesive materials, place signs, displays, or other exhibits, on or in any portion of the premises without the written consent of OWNER, except as may be permitted by law. RESIDENT may not install fixtures or devices without prior, written consent from OWNER, and subject to OWNER’S reasonable installation and maintenance guidelines to be provided upon request for consent.

If you never sought or received written permission to install the satellite dish, the landlord can argue that he has the right to require that you get rid of it. That’s why it’s important for tenants to read their leases carefully. If your lease requires the landlord’s written permission to sublease or make an alteration, you must get written permission from the landlord. You can’t rely on his verbal acceptance or his implied knowledge, because he’ll lie about it later. As I’ve said before: More lies are told in court, under oath, than any other place except church.

If you don’t have a provision in your lease governing alterations, and the dish has been installed professionally, you may be okay. At lease the landlord cannot evict for for breaching your lease. You may be able to make an agreement with the landlord to to move the satellite dish form the deck.

Did the landlord waive his right to make you remove the satellite dish?

Waiver is legally defined as knowingly relinquishing or abandoning a known right, claim, or privilege. Without an agreement it’s very difficult to prove that the landlord intended to allow you to install the satellite dish.

“Services provided by the landlord connected with the use or occupancy of a rental unit including, but not limited to: quiet enjoyment of the premises, without harassment by the landlord as provided in Section 37.10B; repairs; replacement; maintenance; painting; light; heat; water; elevator service; laundry facilities and privileges; janitor service; refuse removal; furnishings; telephone; parking; rights permitted the tenant by agreement…and any other benefits, privileges or facilities.”

Usually the landlord provides services to the inception of the lease and if they are included in the lease or if provided by a later agreement agreement, they become included in the lease. Once again, unless you can prove that he agreed (intended) to let you install the satellite dish, either by actual written agreement or perhaps a string of emails or texts, or witnesses to his agreement, it will be hard to prove that the landlord intentionally waived his right to make you take it down.

Is the landlord estopped by his conduct from making you remove the satellite dish?

Estoppel is a legal concept that prevents a party from asserting a a fact or claim inconsistent with a position that the party previously took either by conduct or words, especially where that representation has been relied upon or acted upon by others.

You may have a defense to an unlawful detainer (eviction) action because the satellite dish has been installed on the deck for eight years and the landlord has known about it for at least three years and didn’t say anything.

Even if you voluntarily remove the satellite dish, given the facts you presented, I don’t think you would have much of a case for a reduction of rent at the Rent Board based upon a substantial decrease in housing services because the landlord did not provide the service in the first place. “Landlords may defend a decrease in services petition by proving that the item was not a housing service provided, promised or reasonably expected at the commencement of the tenancy.”

Remember your rights don’t mean squat unless you have the means to assert them. More and more in this country rights are for the rich.

Evictions are very expensive to defend and landlords know this. Landlords bet that they can outspend a tenant in legal fees and they’re usually right, so it doesn’t matter what lies they tell or what asinine legal theories they assert. It would be worth it to your landlord to spend $100,000.00 to evict you. If you have lived in rent-controlled apartment since 1996 he will likely increase the value of his building by a million bucks!