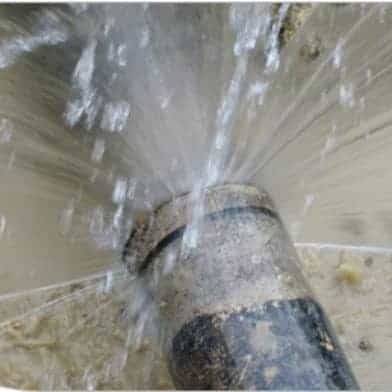 How Do I Get Reimbursed For Utility Overages That Aren’t My Fault?

I rent a one bedroom apartment in a Victorian house that was constructed about 120 years ago.  The house has 4 units, one of which is owner occupied.  I pay $1750 a month plus $150 for garage parking and I’ve been in the unit since June 2010.

My lease requires that I have the water bill in my own name and pay it, which I do.  For over a year, the bill was about $50.  Late last year, it’s started increasing dramatically, and my most recent bill was over $200.  I called SFPUC and they told me they could tell I have a leak because the water is always being consumed, even at night.  I set up a time for an inspection which my landlord attended.  I could not attend as I was working.  She informed me that the inspector said the leak was not in the unit but elsewhere in the building.  She informed me she would have her son look into it, and that he has some expertise in this area.  That was two weeks ago.

I believe that my landlord is responsible for the overage due to the leak.  SFPUC says they will reimburse for half of the overage when we prove that it has been repaired.  How do I (1) get this repair done ASAP, (2) get my landlord to pay the overage, either all of it or what’s not reimbursed by PUC.

My landlord is generally a nice person but the house could be in better repair.  I don’t know if it’s an illegal unit or not, and if I got the building inspector out, I’m pretty sure they would find a good number of problems.  I don’t intend to stay in this apartment long term but do plan to stay for at least six months.  I don’t want to cause more trouble than necessary, but I want my money back for the over paid water.  Should I start deducting it from my rent?  What about the last 4 bills that were high?  What is a legal, polite but assertive way to handle this?

This is an issue that is more common than you might think. I’m not clear on whether you are paying the water bill for the whole building or just for your unit. Unit water meters, while becoming more common, are not often found in old Victorian buildings. That’s why it is more common that landlords pay for water.

A side issue here could be that the house had been chopped into units illegally. If you are also sharing your PG&E bill or your utilities are included in your rent, you should look into the possibility that your unit is illegal. SF Assessor-Recorder’s website. Of course, if your unit is illegal, that would open up a can of worms that I’m not going to discuss here.

Unfortunately, in my experience, when landlords ask their sons to look into anything, nothing gets done. Certainly, her son could be a licensed plumber and I may be wrong. But that’s the point, she is going to need the help of a professional to find and fix the leak.

You need to compile all of the documents you received from SFPUC. You need something in writing from them that states you did not cause the leak and/or that the leak is coming from a part of the building not associated with your apartment. Compile all of your water bills to get an average charge to demonstrate the amount of the utility overcharges.

Then simply ask the landlord to reimburse you. I think that should be done in writing and the letter should include a brief synopsis with the proof that you are in no way responsible for the leak. (BTW, I believe that letters should always be one page long, two if you must.)

This is also the time to mention that she needs to repair any conditions in your unit that may represent a substantial decrease in services–roof leaks, heating issues, broken windows, etc. You should go to the San Francisco Tenants Union to discuss this with a tenant counselor.

If the landlord doesn’t make the other repairs in a timely manner, call a Housing Inspector for the Department of Building Inspection to get any violations on the record.

If your landlord refuses to reimburse you, or, more likely, just stalls, you should notdeduct the overpayment from your rent because you could risk an allegation that you breached your lease by failing to pay your full rent for the month.

As I’ve said many times, it’s always better to be a plaintiff in a legal action rather than a defendant. File a petition alleging a substantial decrease in housing services at the San Francisco Rent Board instead.

You have already compiled your evidence, now all you have to do is fill out the form and file it. You should include any other decreases in service regarding habitability of the premises with supporting evidence. The Tenants Union can also help you with this.

One of the reasons I like working with tenants is that they’re usually nice people who are not vindictive. Most just want to get what they pay for and live their lives. Most don’t want to sue anybody and they usually look for the humane, civilized approach to resolve problems. Sometimes problems can be resolved in that manner.

Unfortunately, the landlord-tenant paradigm is based upon engrained beliefs that the landlord is always in control. When tenants attempt to assert their rights in any manner, however politely, the old passive aggressive lord of the manner mentality can rear its ugly, antiquated head.

The legal, polite way to handle this is to be polite but direct. The leak needs to be fixed and you want your money back. If this doesn’t happen, you dispassionately use the legal system to resolve the issue, no more, no less.