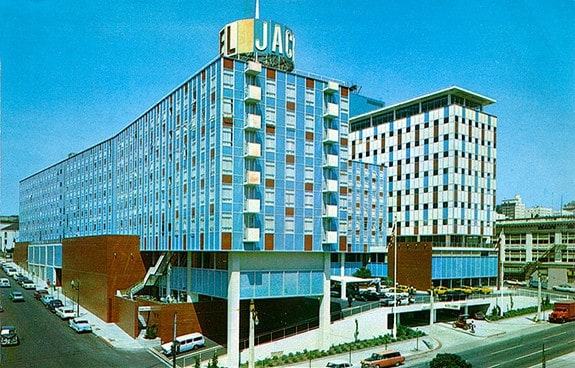 “The Jack Tar is a symbol of things to come, and presumably the day is not far distant when the storied hills of Baghdad-by-the-Bay will be covered with lively replicas of its Southlandish bravado.”   –Herb Caen, The Crack in the Bay Window, The San Francisco Chronicle, April 12, 1960.

Herb Caen famously criticized the Jack Tar Hotel once located at Geary and Van Ness. Why? Not only because it was butt-ugly, but that it did not represent the character of the City that he had grown to love. “In San Francisco one has to look back to find the key, at least architecturally. The question before the house is simply this: is San Francisco to become a sort of unlikely parking lot for concrete blockhouses and balconied bath houses, traversed by the freeways they in some ways resemble, or will some attempt be made to preserve the character of the last “different” city in the country? Or, to put it another way: which sings the song of San Francisco more strongly — the cable car, literally rooted to the heart of the city, or the Jack Tar Hotel?”

Herb Caen sang the song of the City, his Baghdad-by-the-Bay, when beatnik writers like Kerouac and Ginsberg could live here and write without two nickels rubbing together in their pockets; when Richard Diebenkorn was a student at the California School of Fine Arts beginning to develop his aeronautic landscapes; when Jefferson Airplane and the Grateful Dead played free concerts for hippies who could still find a way to pay the rent; and even when a newcomer like me could scrape up enough dough to pay rent and hang out at the Mab and vote for Jello Biafra for mayor in 1979.

In 1960, Mr. Caen reminded us that some of San Francisco’s magic lies in its “continuity with a past that was as colorful and memorable as that of any city 10 times its age.” Herb Caen didn’t write as much about life “South of the Slot”–the vast, now mostly residential, neighborhoods south of Market, like the Mission. I live in the Mission and we sing the song of the City in our art and our work as loud and as proud as they do in North Beach.

And now it is our turn to become a “parking lot for concrete blockhouses.” Southlandlish developers make no attempt to preserve the character of our part of this “different” city. To make matters worse these monstrosities springing up in the Mission masquerade as “housing.” Because they are new buildings and built as condominiums, the units are not covered by the Rent Ordinance and never will be (unless the hideous Costa-Hawkins Act is repealed), so they can be rented at “market rate.” (Of course the only way to justify calling the rental business a “market” is to assume that land is a commodity that can be manufactured, bought and sold. But as all tenants know, land isn’t Doritos–you can’t eat all you want because they can’t make more.) Yet manufacturing housing seems to be the justification for building these ugly, unsustainable, expensive monuments to greed. Of course, as all rent-controlled tenants understand, one has to be rich to live in one of these shit boxes. I walked around the neighborhood a couple of days ago. I found three buildings within a few blocks of my apartment that prove Herb Caen’s prescience. 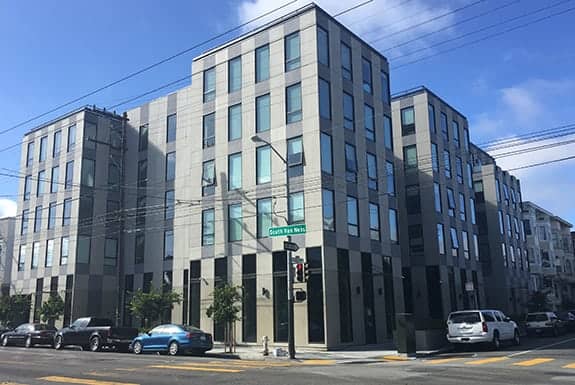 This one may have well as been designed by former San Quentin inmates to serve as a visual aid to remind them that they never want to live in prison again. The only element missing is a machine gun turret. Hey, there’s a unit in the building coming up for rent! It’s only $5,200.00 per month with a $13,800.00 move-in cost! 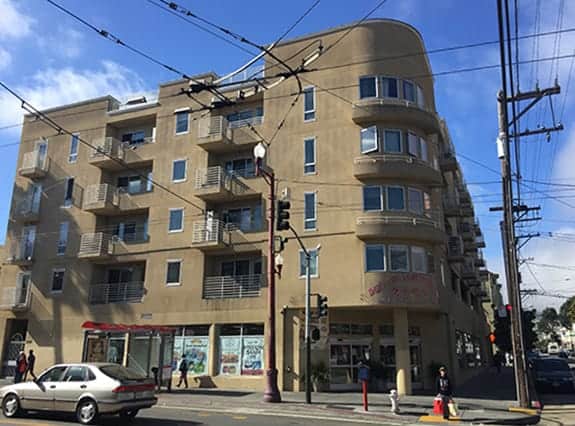 This building seems to embrace the suedo-Queen Anne Victorian style–that’s right, suedo, as in a 1972 BarcaLounger complete with grandpa’s little dribbles–with rounded bay windows. Perhaps the designers were paying homage to Herb Caen when they designed the bays: “Irreplaceable (if sometimes horrible) Victorian examples of an era that gave birth to the very image of San Francisco are disappearing daily; one by one, the bay windows are being smashed — the windows that formed the shining, unique face of a city.” I watched this building being constructed in fits and starts over about a two-year period. The construction stopped for quite some time leaving framing exposed to the weather, molding away. They did remove the contaminated material when they restarted the construction, but they still painted the building a mildewy, baby shit beige. 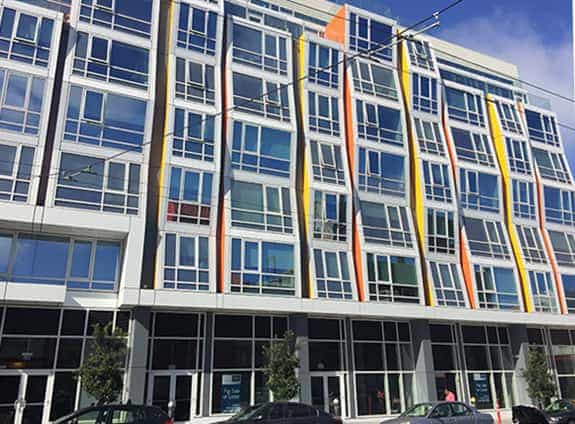 Tenants, need any more reasons to vote Yes on Proposition I? I don’t. 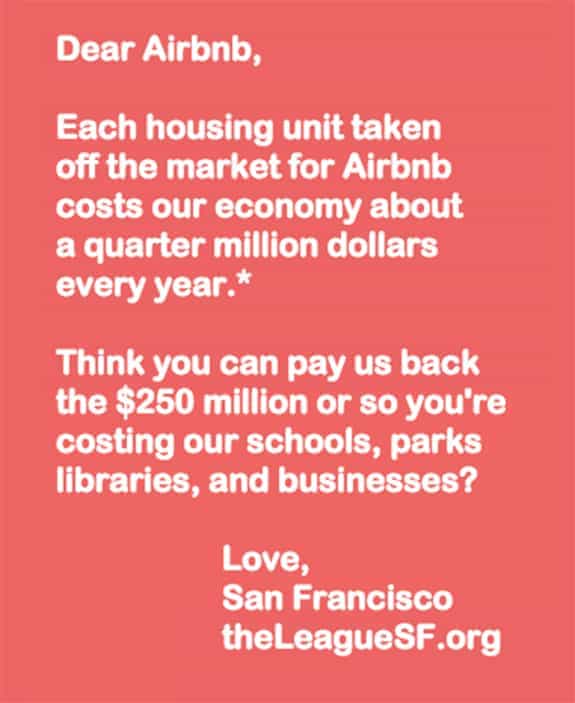 Here’s where the feathering comes in. If it isn’t enough to flaunt the lack of affordable, rent-controlled units, by building oversized, ugly, million dollar-a-condo projects, landlords have stepped up their campaigns to oust tenants from rent-controlled units so that they rent them as hotels with Airbnb and other similar agents.

In the last year, I’ve seen a huge uptick in calls from tenants complaining about landlord tactics to legally or illegally oust them from their in-law units, as well as any unit located in a two-unit building. The San Francisco League of Pissed of Voters tweeted this message to Airbnb in response to a series of loathsome ads it placed around town to admonish the City to use Airbnb taxes to create bike lanes, feed expired parking meters and to keep the library open later. Indeed the asterisk refers to a report by the San Francisco Controller, which states in part on page 8:

•  If short-term renting results in the withdrawal of a housing unit from the residential market, then the reduced supply would lead to higher housing costs.

•  The citywide economic harms associated with higher housing costs are fairly severe. According to the REMI model (Regional Economic Models, Inc.), removing a single housing unit from the market would have a total economic impact on the city’s economy of approximately -$250,000 to -$300,000 per year. This exceeds the annual total economic benefit from visitor spending, host income, and hotel tax, given prevailing short-term rental rates.

• On a net basis, then, a housing unit withdrawn from the market to be used for short-term rentals produces a negative economic impact on the city, even if the unit generates host income, visitor spending, and hotel tax every day of the year. Unless the Airbnb visitors are being housed in the Jack Tars springing up all over town, they must necessarily stay in residential units removed from the market, period.

The League of Pissed Off Voters conservatively used an estimate of 1,000 units removed from the market, when the number of units rented in this manner could be as high as 10,000. Certainly the number of units removed in San Francisco could reach that number if the current, unenforceable law remains in place. In other words short-term landlord greed could cost the City $2.5 billion per year, not to mention the cost in community and culture rooted to the heart of the City. I get a kick out the fear tactics used by Airbnb’s TV and print advertising in opposition to Proposition F, particularly the one about neighbors spying upon one another. Any tenant who has experienced this, and many have, know that landlords spy on them all the time when they install “security” cameras in commons areas of a building, pointed right at a suspected tenant’s door. If you haven’t experienced this directly ask around, you’ll find someone who has. With respect to reporting illegal Airbnb rentals, just as I have an obligation to report a public nuisance to the appropriate agency, I have an obligation to report this nuisance that so severely will affect the City. Another easy issue to disregard is the enhanced reporting /licensing requirements in Proposition F. Evidently, only about 6% of hosts have currently registered their units and there’s little enforcement to make them do so.

You don’t have to read the law to understand how to vote on these issues.

That may sound strange coming from a lawyer. I actually did read the law, but I didn’t have to, because I’ve learned a few things since I moved to the City in 1979. I’m sick and tired of rich assholes hijacking representative democracy.

One way they do that is to flood the media with fear campaigns about a given proposition. They tell you you’ll lose your job, in this case you won’t, but you’ll have to commute from Modesto to do it. They tell you that your neighbors will be spying on you. Certainly in the “community” that Airbnb envisions–a transient community, in which nobody knows or cares about their neighbors–this could be a problem. This self-fulfilling prophesy can only be realized by destroying existing communities comprised of long-term rent-controlled tenants.

This is the capitalists’ wet dream–to destroy communities and replace them with transients who would spend their money for awhile and move on, rather than fight for their long-established friends and neighbors. What do I do to determine how I will cast my vote on any given proposition? I follow the money. I simply vote contrary to a given campaign that spent the most money on a given issue. In this case Airbnb rich assholes have spent far more to oppose Proposition F than their opponents, so I would vote yes even if I didn’t have time to review the law. Swear to god, it works every time. Another reason tenants should vote yes on Proposition F? For now, we outnumber the greedy landlords, developers and sharing economy shitheads. How long will that last?