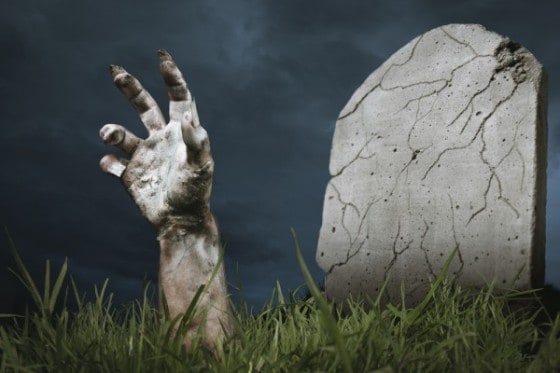 How Do I Get My Former Landlord’s Dead Hand Off Me?

My sister and I are original tenants for an apartment in a San Francisco 13-unit building built in the 1920’s. Our lease is now month to month. I’m moving out, she’s staying, and her boyfriend is moving in. She received approval from our landlord for a replacement roommate per your previous posts recommendations. Included in the approval email the landlord wrote:

“The replacement tenant will not be recognized as an Original Tenant (persons named on the lease agreement).  Also, rent and all liabilities (including any damages tenants are responsible for, etc.) will remain the liability of the Original Tenants and we will not accept rent from anyone except the Original Tenants.  No amount of your security deposits will be returned during this transition.  Essentially, Jessica is still a responsible party to the apartment.”

I’m interested in the last sentence. Why am I still a responsible party to the rent and all liabilities to the apartment when I can’t move back in at some later time and retain my Original Tenant privileges as noted in the post?

In law school we study wills and trusts. We read about rich assholes who create trusts and wills that disburse assets generations later, for example: I leave one million dollars to my granddaughter’s first daughter on the condition that she marry a goat on a summer solstice that occurs on the date of a full moon. This is called dead hand control–the dead hand of the ancestor reaching out of the grave to control the living heirs years into the future.

As I have written many times, landlords like to control tenants. This is a silly example of a landlord who cannot cut the puppet-master strings. He (or his lawyer) is so concerned about collecting every future dime that he thinks he can assign you future liability even when he knows you completely severed your contractual relationship with him. Impossible.

Are you liable for rent? The landlord knows you moved out. How can he charge you for services which he never provided to you? If he sues you, you cross-complain for malicious prosecution.

Are you liable for damages to the unit? Technically, your part of the security deposit could be at stake, but you probably already arranged for reimbursement of your portion of the deposit from your sister.

Will you be liable for intentional damage to the unit? Only if the landlord can prove that you carved the six-foot diameter goat’s head and pentagram in the hardwood floor under the bed. (I’m keeping with the theme above.)

Write the landlord and tell him that you are not responsible for the tenancy in any way because you’ve moved out. If you want to avoid an accusation of intentional damage in the future, invite the landlord to inspect and note the condition of the unit now.