My Master Tenant’s Fallen In Love, Am I Screwed? 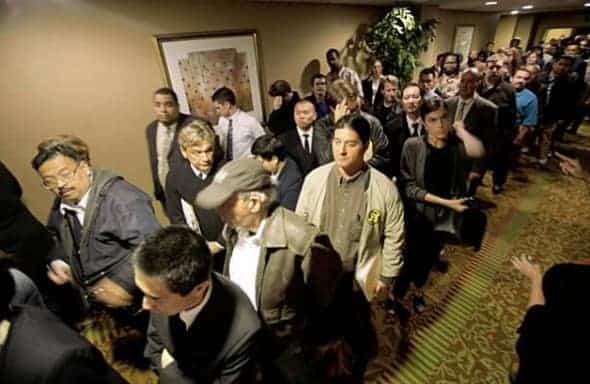 My Master Tenant’s Fallen In Love, Am I Screwed?

Renters wait for hours to apply for a Tenderloin studio apartment priced at $2500.00 per month.

So in the midst of Rentpocalypse 2012, the master tenant has fallen a little head-over-heels for someone and has increasingly been spending time at their place. As in enough time that even her cat spends more nights over there than in the apartment lately.

I’m thinking there’s a non-zero possibility that she could be moving out, and possibly soon. Not to push my already good luck, but I was wondering: As a subtenant, what are my rights if she gives notice? Would I have to negotiate a new lease entirely? Would I inherit any rent protections? The only interaction I’ve had with the landlord, in writing or otherwise, was a check written out to him personally for August rent, which he cashed.

Welcome to Rentpocalypse 2012! Have a seat, but don’t stay too long.

As you might guess, this is a common scenario, but at least you are in the position to gather information and make some plans.

You need to speak to your roommate and ask her if she has any future plans to move. Point out that it is important to understand her plans because it’s likely that you will either have to pay increased rent or move as well. Read last week’s column to understand why.

Essentially you are a subsequent occupant as defined by Rent Board Rule & Regulations §6.14(c). Your landlord will be entitled to increase the rent when you vacate.

I don’t put too much stock in the argument that because the landlord cashed a couple of your checks, you’ve established a new tenancy. The Costa Hawkins Rent Housing Act (which should be repealed) in Civil Code §1954.53(d)(4) states:

“Acceptance of rent by the owner shall not operate as a waiver or otherwise prevent enforcement of a covenant prohibiting sublease or assignment or as a waiver of an owner’s rights to establish the initial rental rate unless the owner has received written notice from the tenant that is party to the agreement and thereafter accepted rent.”

You should keep paying the rent to the landlord because the longer that goes, the stronger the argument that you are a party to the agreement. But you should not have any illusion that you can keep renting the flat at the current rate simply because you paid rent directly to the landlord.

More importantly, talk to your roommate. Hopefully, she doesn’t have any immediate plans to move. Knock on wood. Maybe you can ride out Rentpocalypse.

They Don't Call 'Em Landlords for Nothing